To overcome the digital divide in French Guiana, Marlink has been selected by Société Publique Locale pour l’Aménagement Numérique de la Guyane (SPLANG) to upgrade and operate the local satellite network as part of the local telecom infrastructure. Through a fully managed Network Operator Service, Marlink provides the entire satellite capacity, LTE & Wi-Fi coverage, as well as the commercialisation of the Internet services to SPLANG subscribers. The solution is backed by local customer care and network maintenance. 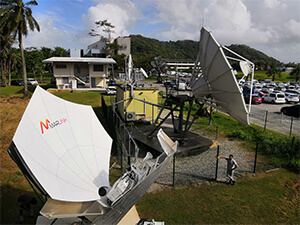 The digital divide is a reality, especially for small remote villages located in the Amazonian forest in French Guiana. In the willingness to avoid the migration of the inhabitants of the remote villages towards the main towns, the French authority created SPLANG to drive the digital development of the Guianese territory.

Acting as the public telecom operator, SPLANG provided the first satellite-based Internet access services in the most difficult reachable areas in 2010.

To enhance the country’s telecom services, SPLANG and Collectivité Territoriale de Guyane (CTG) selected Marlink as the preferred satcom service provider to upgrade and operate the satellite network and to commercialise the Internet services to the end users.

Marlink was selected to upgrade and operate a satellite network of 1 Hub and 18 remote VSAT stations including the power supply subsystems, LTE and Wi-Fi access points as part of the existing telecom infrastructure of French Guiana.

The existing VSAT network was upgraded from a SCPC baseband to Marlink’s Hub solution based on the Newtec Dialog platform. The extensive VSAT network is today a robust and reliable network to deliver redundancy and uptime. It is operated with high-speed Ku- and C-band capacity, providing up to 300 Mbps bandwidth. C-band was added to the network to take advantage of its resilience and availability in rainy conditions.

With a service availability of over 99.8% under a very demanding service level agreement, Marlink is constantly managing the service delivered to SPLANG through proactive network monitoring, reporting and predictive maintenance. 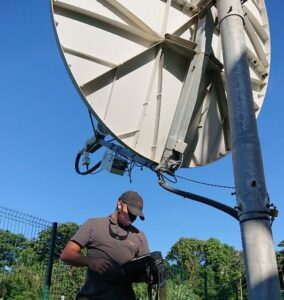 Several types of dedicated connectivity services are offered to the inhabitants of the 18 remote villages:

Moreover, Marlink operates a dedicated Help Desk to support the end-users. Business tools have been developed to enhance the customer service by standardising and automatising the administrative tasks, service plans and customer invoices.

Using its own field engineers located in Cayenne with support from Marlink’s Network Operations Centre, Marlink is in charge of installations and upgrades, 24×7 network support and maintenance across the territory.

Marlink signed the first contract with SPLANG in 2017 to provide Ku-band connectivity. In addition, Marlink supplied microwave to extend the reach beyond VSAT connectivity. Local Internet distribution is managed through LTE/4G for Box subscription services and free Wi-Fi for public facilities.

In 2020, a new contract extended Marlink’s scope to provide C-band capacity being the single provider of the satellite capacity and the complete network management.