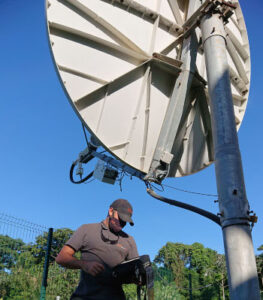 Oslo/Paris, 15 July, 2020. Marlink has been awarded a contract with Société Publique Locale pour l’Aménagement Numérique de la Guyane (SPLANG) to provide Internet access to the inhabitants of remote villages in French Guiana. The contract covers the provision of Internet access via satellite to subscribers of SPLANG’s Wi-Fi service and the complete management of the network solution.

Marlink signed the first contract with SPLANG in 2017 to provide high speed Ku-band connectivity to deliver Internet access to educational and governmental institutions and the general public in French Guiana. The new contract extends Marlink’s scope to a C-band VSAT network solution.

Marlink will deploy its smart network as a service to provide connectivity up to 60 Mbps, which can increase to 100 Mbps over the next four years. C-band was chosen to take advantage of the existing SPLANG infrastructure and C-band’s better resilience and availability in rainy conditions. Marlink will fulfil the contract with fully managed services across the territory with 24×7 installations support and maintenance for SPLANG backed by a customer help desk.

Over the three years of partnership with CTG which is the main owner of SPLANG, Marlink has built a strong track record of delivering and managing smart network solutions and managed services, with an average service availability of over 99.8% under a very demanding service level agreement.