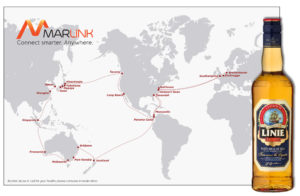 Marlink’s flexible, global Sealink VSAT is proving integral to the success of a unique ‘slow TV’ experiment spanning four months and two equatorial crossings. For the purposes of the exercise, Marlink’s brief was deceptively simple: to enable unbroken live streaming of the Wallenius Wilhelmsen vessel Tamesis on a four-month sea voyage from Bremerhaven in Germany to Australia and back again, taking in stopovers in Germany, Holland, the UK, the USA, Mexico, New Zealand, Singapore, China and Japan en route.

Tamesis already benefits from a Sealink VSAT solution, but in order to achieve the high upload speeds required to produce consistent live footage over such an extended distance and duration, Marlink has allocated a temporary bandwidth upgrade to the vessel, adjusting its existing hardware setup ensuring no additional hardware was required. The ease with which this operation has been carried out demonstrates not only the fundamental adaptability of Sealink VSAT service, but also Marlink’s expertise to share its extensive satcom knowledge in close consultation with its clients.

The spur for the project came from Arcus, the world’s largest producer of Linie Aquavit, a celebrated Norwegian beverage dating back to the early 19th century. The drink derives its name from a tradition whereby oak barrels of Aquavit are routinely transported on boats from Norway to Australia and back again, thereby crossing the equator (‘linje’ in Norwegian) twice before being bottled.

Aquavit’s makers have always maintained that the incessant motion, high humidity and wildly varying temperatures encountered by ships on this 2,880-hour passage are all major contributory factors to the drink’s accelerated maturation and eventual taste.

Arcus approached Marlink to assist in proving the importance of the actual voyage for the taste of the aquavit – hence the absorbing live stream, which can be accessed here. A camera provides a clear, sharp view of Tamesis’ cargo deck, with the relevant containers aboard: and while leveraging the calming nature of the recent Norwegian phenomenon of ‘slow TV’, the real-time coverage has already captured some stirring sights since the vessel left Bremerhaven recently – not least a heavy snow storm in the Atlantic.