Marlink is providing vital connectivity for an Arctic Climate Science project – Hearts in the Ice.

The project is led by Hilde Fålun Strøm and Sunniva Sorby, two experienced Arctic explorers who will be spending seven months in a trapper’s hut in Bamsebu, in the Norwegian Arctic Archipelago of Svalbard. The two women, who set a record in 2019/2020 by becoming the first women to over-winter alone on Svalbard, are spending another seven months collecting environmental data and weather and wildlife observations. Their findings are shared with stakeholders ranging from the Norwegian Polar Institute, UNIS and NASA to numerous universities and schools.

Marlink supplies crucial connectivity to enable the duo to maintain contact with their support team and to share updates with educational institutions and other partners. They plan to collect and share data on phytoplankton, ice core and saltwater samples, cloud, aurora, and wildlife observations, including levels of microplastics in birds, fish and polar bears. Marlink has also equipped the team with a telemedecine kit to enable them to do regular health monitoring during the mission.

One of the many aspects of the Hearts in the Ice mission is to provide education and inspiration to young people, so in February a live webcast was held as part of a month of activity to promote Women in Science. Marlink’s Jessika Dammert was the keynote speaker, with a presentation about satellite communications and how they work. Several classes from schools in the USA joined the session, with pupils taking part in the live Q&A that followed Jessika’s talk.

As a perfect example of the communications topic, Sunniva and Hilde of Hearts in the Ice also joined live by video from their mission base ‘Bamsebu’ in Svalbard.

Watch a recording of the ‘Exploring by the Seat of Your Pants’ live stream here: 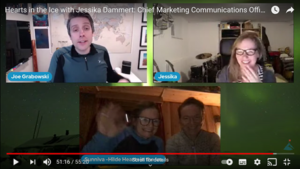 For more information about Hearts in the Ice, watch this video, visit the project team’s website or follow them on social media: